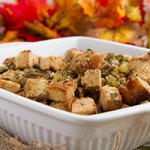 A paleo-friendly, low-carb, keto stuffing recipe made entirely of coconut flour bread. No almond flour. Low-carb, keto, and sugar-free, too.

Remember my low-carb, keto coconut flour bread from Thanksgiving? I made keto stuffing out of it! And not just any keto stuffing, this is THE stuffing that you should make for your whole entire family this Christmas.

Yes. I decided this for you…

You see, not only is this keto stuffing 100% homemade, but it’s filled with digestive health-supporting ingredients (the collagen in the bread + broth will serve you well), it can be made ahead of time, it’s great for just about every allergen (unless you’re allergic to eggs. I’m sorry), and everyone will love it.

How do I know? Because I’ve shared this keto stuffing with over 27 people. Yes, 27. And they all couldn’t believe that it was healthy, keto stuffing.

One thing I learned with this keto recipe? You have to use GOOD coconut flour. I used a grittier coconut flour that I purchased at Costco, I can’t remember the brand, and the bread fell apart, the keto stuffing tasted weird, no good.

And, since I’m on a roll with recommendations, another thing you should do is quadruple this keto recipe. This paleo, low-carb, keto stuffing recipe can be frozen. So, make up a keto batch for your family and a bunch of keto batches for yourself. Then, fry up a cup or so in a pan with some lard, tallow or suet. Not sure how to make lard? This is a fabulous how to. So easy.

So there you have it.

Print
Keto Paleo Low-Carb Stuffing
Author: Leanne Vogel
Recipe type: Keto, Paleo, Gluten-free, Dairy-free, Sugar-free, Yeast-free, Corn-free, Grain-free, Nut-free, Low-carb, Keto
Prep time:  20 mins
Cook time:  30 mins
Total time:  50 mins
Serves: 12
A paleo-friendly, low-carb, keto stuffing made with homemade coconut flour bread. Savory and delicious for everyone at the holiday dinner table.
Ingredients
Instructions
Notes
Stevia-Sweetened Soda: You do not have to use soda in this recipe. DO NOT use diet ginger ale laced with aspartame in its place. If you don’t have stevia-sweetened soda on hand, use more homemade beef broth.
Homemade Beef Broth: I make all of my bone both myself and freeze it for recipes like this one. If you don’t have any handy, you could use store-bought stock. Compared to homemade broth, the nutrition content doesn’t stack up. But it’s a good alternative.
Storage Instructions: If you’re planning on taking this dish with you to a dinner party or the like, do not add the liquids beforehand. Add bread and mixture to a bowl, store the liquid in another container. Bake when you get there. If you’re planning on serving at your home much later, like a couple of days, bake fully, stor in the fridge (for 1 day) or in the freezer (for up to 1 month)
3.5.3208

Start by drying out your homemade keto bread. This is key. It has to be DRY. If you have a dehydrator, they work beautifully.

Then, when your keto bread is ready, start with sauteing your vegetables. This is another crucial step. I don’t include steps in my recipes that aren’t crucial. I don’t believe in wasting time. Sauteing the vegetables for this low-carb, keto stuffing recipe is a necessity.

Just look at how delicious those vegetables look dropping into the bowl of keto bread. Yummo!

Fresh herbs add color, texture and an overall fresh taste to your stuffing. Add ‘er in!

Then, mix the broth and stevia-sweetened soda together in a cup. You don’t have to use the soda. You could use extra broth.

Add the mixture to the keto bread mix and lightly rotate to coat. I did the whole “flip bowl” routine. Pretend you’re a pizza maker… and GO!

Transfer to an oiled casserole dish and bake. If you’re meeting with friends or transporting the keto stuffing, don’t add the liquid until you get there, then bake. If you’re storing it for much, much later, bake ahead of time and reheat.