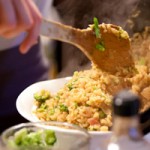 Once the moving truck drove off with our things, Kevin, Pebbles, Lexy and I made the one hour drive over to my parent’s house where we planned to stay before our flight to Montreal a couple of days later.

Last time I stayed at my parents house for an extended period of time was when my condo was being built and  and they were in the process of moving. It was a crazy time. Thankfully, this visit hasn’t been nearly as nuts, quite the opposite actually!

And, staying with my parents means I get to cook food for more mouths than just Kevin and I!

Earlier this week, we had Christina’s boyfriend’s family over for dinner. They’re pescatarians, Mom, Christina and I are gluten-free and dairy-free, and Kevin hates beans (it has to be mentioned)… a perfect opportunity to come up with a menu to satisfy all diets, preferences, and sensitivities!

We had a bunch of meals on the menu, so decided to combine forces and separate the dinner dishes to make life easier. Mom and Dad were responsible for:

And I was in charge of:

It was great to see everyone, cook with Mom and Christina, and share childhood stories at the dinner table. There’s been a lot of that going on. Good food, great conversation, and lots of giggles. I couldn’t have chose a better way to spend our last week in Alberta.

The trick to a good risotto is in the pan. Each time I’ve made one, I’ve used a really well seasoned cast iron pan and haven’t had a problem

Begin this vegan risotto recipe by sauteing the onion and garlic in olive oil until translucent. Then add white cooking wine and lemon and allow to deglaze.

Meanwhile, start heating up the non-dairy milk and chicken broth just until it boils. Reduce heat to a simmer and keep covered at all times.

Once all of the wine has evaporated, add rice to onion mixture and saute for a couple of minutes until the rice begins to brown slightly.

When you add your liquid, it should look like the first picture. Nice and hot, boiling, and cooking. Continue to move the rice around in the pan to prevent from burning.

When the broth mixture is down to about 1-1/2 cups, add chopped broccoli.

Once the rice grain is tender, but not mushy, remove from the pan and top with sliced green onions. Serve immediately!

I chose to pair the creamy vegan risotto with baked chickpeas for added fiber (risotto rice is really low in fiber) and protein. Mom had bought some rosemary for breakfast potatoes the day before, so I went with a rosemary and lemon chickpea mixture to use up ingredients we already had on hand.

They were so tasty, and easy, too!

For the purpose of avoiding making this post the longest known to mankind, you can read the recipe along with it’s nutrition info here.

For dessert, we wanted something light, healthy, and vegan. While I was planning the dessert, I thought it’d be cool to come up with something that was under 50 calories. 50 calorie dessert? I can get behind that!

For the recipe for Raspberry and Roasted Vanilla Peach Cups, head over to my recipe page.

Here are a bunch of other pictures we took during the food-filled night.

Okay, time to pack and get to the airport! See you on the flip side ;)

Difference Between Collagen + Gelatin (plus why you need it!)

#89 How Keto Is Different For Women with Maura Vega