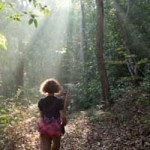 For more on my backpacking trip through India, check out Mumbai experience, Kallikadu, Sivananda ashram introduction, India,  the basics, Sivananda ashram I, Sivananda ashram II, waterfalls and temples, the streets, and varkala posts. I got to see some pretty cool things during my stay at Sivananda ashram in Kerala, India. The ashram organizes day trips on Fridays so visitors get to experience the surrounding area during their one day off a week. Each of the trips were under $20 for the day, included food, transportation, and were super relaxing.

The day began at 6am with a leisurely 30 minute boat ride down the lake, complete with a breakfast of masala milk tea, cookies and dried fruit. The 15 of us got dropped off with a group of guides and embarked on a 1.5 hour hike through the jungle. We took turns carrying the various cooking supplies and walked in silence, enabling us to soak up as much jungle as possible.

{this is around the place where we ran into the wild dogs. They were so territorial. I believe they were guarding a house I spotted far in the distance. How cool to live deep in the Indian jungle!}

{creepy crawler ah! There was one of these in my room back at the ashram. Scared me to death!}

It was gorgeous. There were some pretty awesome looking bugs, snakes and we even got to eat leaves from a masala tree. I didn’t even know such a thing existed!

The deeper we got into the jungle, the steeper the incline. Every time we’d turn a corner I was expecting to see water, but it just didn’t happen! I wanted to ask how much longer it was going to be, but we were using the hike as a silent meditation so I just had to go with the flow and accept that it would be however long it needed to be. Right around the time I accepted it, we were there! Funny how that works. Just look at how beautiful it was, ha!

Once there, our guides set up the ‘kitchen’ and started on breakfast while everyone went swimming.

{the kitchen our guides set up at the opening of the waterfall.}

I observed in envy as everyone played around in the water. I’m pretty sure I was the only person who didn’t think to bring a bathing suit with her to India. Fail. Just when I believed all hope was lost, one of the yogis asked if I wanted to use his boxers as a makeshift bathing suit. Generally I’d cringe at the thought, but I was in India in front of the most amazing waterfall I’d ever seen. What would you do? You’d grab those used boxers and swim.

{journaling in my borrowed boxers and sports bra while everyone was sunbathing.}

We ended up spending 7 hours at the falls chatting and making new friends, eating, basking in the sun, swimming and napping. It was exactly what I needed.

{this was one of the guides. He asked if I would take his picture and made me wait while he prettied himself up. He borrowed the pants from another guide, brushed his hair, buttoned up his shirt and then instructed me on what types of pictures he wanted. Too fun!}

{arrowroot and masala coconut with masala chai for lunch. I must have had 3 helpings of that arrowroot. It’s SO good.}

{afternoon snack – coconut simply bar and an orange I bought from the village the day before.}

The ashram holds Satsang in the main temple in the morning and evening. On the off chance that the Satsang leader is feeling a bit adventurous, he’ll take those interested up a mountain to a temple that sits on one of the highest peaks surrounding the valley. They’ll usually announce this excursion at Satsang the night before… but I kinda skipped it so had no idea it was happening.

The morning of, the wake up bell went off 30 minutes before it was supposed to. Thinking my clock was wrong, I got ready in a jiffy, prepared a quick breakfast, and went down to the temple. Had I known I was about to embark on a 2 hour hike through the jungle and up a mountain, I would have traded my sweater for a t-shirt, brought a water bottle, a better camera and left my yoga mat in my room. Doh!

The highlight of it all is that I can now say that my yoga mat has gone with me up a mountain in India. Pretty cool. The hike was a great way to begin the morning. Doing yoga day in and day out is great, but I was craving something that would get my heart racing! I was huffing and puffing for the last 45 minutes and cursing my yoga mat, heavy bag, and the sweat that was pouring off my body. I certainly got what I asked for!

We got to the temple right before sunrise and sat in silence for 20 minutes before we began to chant. It was breathtaking!

Here’s a short video I took while we were chanting to the sunrise… httpv://www.youtube.com/watch?v=Vxyh2fcRT-o

This excursion was filled with so much indulgence in the form of food, I practically had to roll myself through the day. Set a foodie in a restaurant after feeling like she’s fallen victim to protein deficiency and she’s bound to go nuts! This experience taught me just how overindulged I am and how I could benefit from learning how to eat only when I’m hungry.

We began the morning with a 1 hour bus ride to a vegetarian ‘hotel’ for some masala milk tea and vada. I guess they call some of their restaurants hotels. Why? I don’t know. I couldn’t get a solid explanation. But I have to tell you, when I learned that we were going to a vegetarian hotel, I thought it was the coolest thing ever. You mean vegetarians are the only ones allowed to stay at the hotel? Awesome! The place was packed with people, the masala chai was sweet and the vada was very hot!

With full bellies, we jumped back on the bus for another 1.5 hours to a second vegetarian ‘hotel’ for masala dosa. It was my first time having the thin pancake filled with potatoes and loads of chili’s. It was spicier than anything I’d ever experienced, but it was so good.

{everyone waiting to order. We were all so excited to have a real meal!}

{Kat and I waiting for our meal.}

I tried to eliminate the spice from my tongue by ordering a fresh apple juice. Unfortunately that just added to my extremely full belly.

We jumped back in the bus and drove another 2 hours to the backwaters. The group was then split into two and each got into a large houseboat. We spent the afternoon touring the backwaters, eating banana chips, sipping coconuts, and chatting. I’d never had the flesh of a young coconut before. It was like jelly, a great cure for slow digestion… if you know what I mean.

After a couple of hours on the water, we got back on the bus and headed for another meal… I had maybe two bites. Too much food for this girl!

After that, we headed to Varakala beach for the evening. We sat at a coffee shop, watched dogs play, went shopping, and enjoyed ice cream. It was one of the most magical places I’d ever been. When we got back on the bus, I felt like my heart was ripping at the seams. Something didn’t feel right. After 2 days of fighting this feeling, I decided to leave the ashram and spend my last week back at that gorgeous beach.

Best decision ever… but that’s a story for another day.

Video: Is Keto Right For You?

Video: How To Heal, Detoxify and Reduce Inflammation

Discover the Power of Electrolytes: Unlocking Optimal Health for Women and Wellness Enthusiasts