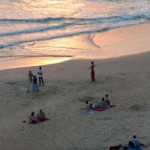 For more on my backpacking trip through India, check out Mumbai experience, Kallikadu, Sivananda ashram introduction, India,  the basics, Sivananda ashram I, Sivananda ashram II, waterfalls and temples, the streets, and varkala posts. The plan, as I was organizing my trip to India, was to stay at the ashram for the duration of my time abroad. Knowing that I would remain safe in the confines of the ashram helped me gain the courage I needed for this trip. I knew I wouldn’t get to see everything, but I was okay with that.

Once I got settled at the ashram it wasn’t long before I was pushing the boundaries I’d set for myself. I went for walks into the city, climbed to the top of a mountain to visit a temple, and braved a full day hike through the jungle. Each of these adventures challenged my independence and threatened my security… but it felt so good.

The biggest of my India adventures, and probably one of the bravest things I’ve ever done, was when I decided to leave the ashram and travel 80km North to Varkala Cliff. Having connected with many seasoned backpackers throughout my journey, this seems to be the way everyone travels – get bored, move on, find a new place you like along the way, stop, enjoy, repeat. Although I only repeated it once, here’s an overview of my first real backpacking experience…

Did you arrange a hotel? How much did you pay? I didn’t arrange accommodations before I left the ashram. I just figured I would arrive and figure out the rest. There were lots of accommodations, but many of them were over $40USD, a bit too high when all you have left in your bank account is $200USD. In the end, after about 2 hours of searching, I managed to find a home stay for the equivalent of $10USD a day. It was a bit pricey, but the room had a private bathroom, was on the second floor, and had a hammock which I made really good use of.

The owners of Believe (Kaithakuzhi) Home Stay were kind and social. They would make me masala chai often and check up on me to ensure I was okay.

What sorts of food did they have there? All different kinds. Tibetan was the most popular and healthiest although I did treat myself to a plate of French fries and a diet Coke during my stay. I just needed a taste of home! I’d met up with a couple of yogis while I was staying in Varkala and we had our usual hang out spots chosen in a matter of days.

Cafe del Mar had great shakes, salads, French fries, hummus, green tea lemonade (oh my gosh, I drank so much of that stuff), and cakes. I remember the day I ordered this tuna salad. It was one of the happiest days of my life… protein!

We also frequented Little Tibet where they served really great naan, curries, fried rice, and cakes. Again with the cakes… I know!

There was also a great Italian place, Cafe Italiano, which had the best tomato basil salad… ever. It had been weeks since I’d enjoyed fresh vegetables. I’m pretty sure I ordered this salad every day I was staying at the Cliff.

How much did you pay per day to eat there? I enjoyed fruit shakes in the morning at a local coffee spot, Cafe del Mar, for about 150 rupees ($2.60USD). The staff were great at accommodating my allergies and also were willing to add my protein powder into the blender while they made my drink.

For lunch and dinner, I usually stuck to salads, hard boiled eggs, or cooked rice topped with my secret stash of coconut oil and hemp seeds. These larger meals usually set me back 300 rupees each, about $5. If I had to put a dollar amount to how much I spent on average per day on food, I’d say about $15 dollars. Having many of my own gluten-free travel friendly snacks with me definitely helped keep the cost down.

Did you feel safe? Yes. There was an evening where I ended up staying out really late, past midnight. Instead of walking back to my room alone, I had a male friend escort me just to be safe but I’m sure I didn’t really need it.

Was the ocean safe to swim in? I’d heard that the waves were really strong and they were known to injure people so I’m sad to say the only part of me that touched the water were my toes!

What did you do all day? I woke up at around 5am, snacked on dried fruits while reading my book in my hammock, went for breakfast, did a 2 hour yoga class, read some more, hung out on the beach, went into the town to find new things and meet new people, napped, ate some more, did 2 hours of yoga again, meditated a bit, went for dinner, read a bunch more. All the while writing in my journal every step of the way. That thing was glued to me at all times! I also drank my fair share of Limca. If you ever get a chance to try this stuff, do it. It’s like Sprite but lime and about 100 times sweeter. When in India!

Were the yoga classes expensive? They weren’t cheap, that’s for sure. I paid 500 rupees ($10USD) a day for yoga. That included two 2 hour classes, one at 9am and the other at 4pm if I remember correctly. It doesn’t sound like a lot, but for India standards it was a bit too high. The classes I attended were in the basement of a hotel and were called Yoga with Haridas. Great teacher!

What other activities are there to do in Varkala? My favorite activity was sitting at Cafe del Mar people watching. I did this for probably 3 hours a day and enjoyed every minute of it. When I felt like being a bit more social, there were loads of things to participate in. There was an endless amount of spas to get facials, massages, and henna…

And there were multiple tours that were offered through the many tour guide offices on the Cliff. How did you get back to the airport? How far of a drive is it? I decided to stay as late as I could in Varkala so that I could spend as much time with my new friend Lina as possible. So, I hired a cab driver to take me from Varkala Cliff to Trivandrum. The ride was about 1.5 hours and cost me 700 rupees ($12USD).

I got to the Trivandrum airport about 2 hours before my flight. Hung out at the gate for awhile, had a nap, and made my way to my last stop… Mumbai. But that’s a story for another time!

This entry was tagged: india, travel

Working Out on Keto: 7 Exercise Programs I’m in Love With