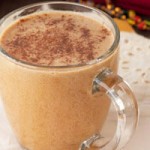 I’ve never been able to handle stimulants very well. Caffeine, sugar, tobacco, even too much cacao can send me over the moon! How I managed to get through adolescence addicted to espresso, coke zero, cigarettes, and jujube’s is beyond me. I was in a constant state of energy highs and lows. I found it hard to concentrate, lacked motivation, and became useless, even with the most mundane of tasks.

Me on my 20th birthday, cigarette in hand. Just ignore the $5 bottle of sparkling wine in front of me ;)

To make matters worse, I got hooked on drinking 2 pots of coffee a day during my first year of work. One of the first things I did when I started learning about clean eating was work on cutting down my stimulant consumption. I understood that it wasn’t something I could accomplish overnight so I started small and stayed positive no matter how insurmountable it all felt.

So what does a girl do when she wants to indulge in a masala chai to remind her of the time she spent in India but doesn’t want to feel all jacked up on caffeine? She makes a rooibos masala chai, of course!

Print
Rooibos Masala Chai
Author: Leanne Vogel
Recipe type: Vegan, Paleo, Gluten-free, Dairy-free, Refined sugar-free, Yeast-free, Corn-free, Grain-free, Nut-free, Egg-free
Prep time:  5 mins
Cook time:  5 mins
Total time:  10 mins
Serves: 1.5 cups
Switch out the black tea with naturally caffeine-free rooibos tea so you can enjoy a masala chai at any time of the day. Not only is rooibos naturally caffeine-free, but it’s excellent for your digestion, and has a high amount of antioxidants.
Ingredients
Instructions
Notes
If you want to use homemade flax milk, try this process instead as the fiber likes to separate from the milk when heated and will create a cloudy, uneven chai:

Use 1 cup of water instead of ½ cup.
Only use ½ cup of flax milk instead of 1 cup.
Place flax milk on the counter until it’s brought to room temperature.
Follow directions above, but add flax milk at step 4.
3.3.3070
View Nutritional Information (once on page scroll down) Have you ever struggled with an addiction? What steps or strategies did you use to help you overcome it? Well, now that all the heavy talk is out of the way… have a happy Friday and a joyous weekend!

This entry was tagged: chai, flavors of india, india, tea

The Best Way to Test Ketones

Video: How To Detoxify Right (and why juice cleanses are only 5% of the battle)