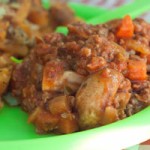 It’s hard to believe that our Cypress Hills trip was just 2.5 weeks ago. So much has happened in the days following our mini vacation that it feels like a month or two has passed.

The first couple of days of our camping trip had us visiting cafes, taking a tour of Medicine Hat, and treating ourselves to copious amounts of naps. The following days looked a wee bit different but was just as laid back and carefree… here goes!

Camping just isn’t camping without card games. Generally we bring along a bunch with us, but they were a last minute item that we just forgot to pack. Luckily for us, there were a bunch of Walmarts between home and the campground, so we just picked up a bunch of new ones on our way out of the city. Monopoly deal turned out to be an awesome game. In fact, we’ve been pulling out the deck every night since we got back for a couple quick games… and I’ve won every game, just an FYI ;). Pictureka! had us making weird faces to see who would go first, which is fun, but we found the game to be a bit too young for us.

Guess who got to go first each and every time? Not sure what I was trying to be there… but it worked!

Instead of making pasta and meat sauce for dinner on Saturday, I chose to amp up the veggies in the sauce and have it alongside a generous helping of sweet potato hash. Such a marvelous plan, that was.

I made dinner, so Kevin cleaned up while I got the fire started for our marshmallow roasting!

We usually buy a bag of marshmallows at the beginning of the camping season to take with us on our various summer explorations. Just a couple of marshmallows a trip is all we need to satisfy the sugary craving.

Kevin is my favorite person to go camping with because he knows how to make the perfect roasted marshmallow. (Shh.. don’t tell him that!) His marshmallows turn out lightly toasted, melted, and never, ever burned! I think it has something to do with patience… a virtue I haven’t quite mastered yet.

Sunday morning was cooler than normal for Southern Alberta. The puppies were ready and rearing to go at 5am, so I woke up with them, put on a big pot of water for tea, and started up a roaring fire to keep us warm.

It was so peaceful, just the three of us girls, hanging out and keeping warm by the flames. Lexy doesn’t really understand the concept of fire so there were a couple of times I thought she was just going to jump in, but we managed to get through the morning unharmed.

When Kevin woke up, I made breakfast – millet porridge with fried bananas for me, and a bowl of homemade granola with banana slices for Kevin.

Since we’d spent the last 4 days napping, lounging, and eating, we figured it was about time we went for a little hike up to view the canyon before we headed home in the afternoon.

It was a 4km hike, 8km round trip. The day was cool so the bugs didn’t bother us much which after 4 days of countless mosquito attacks, was welcomed with open arms!

When we got back to the campsite, we were surprised to see that most people had left already. We were sure they would have stayed until after lunch at least but we didn’t mind, it was nice to be alone for the first time all weekend. We decided to prepare a light lunch before we started disassembling the tents, tarps and the like.

Kevin wanted a tuna sandwich but a plate of veggies and baked potato chips did the trick. Hard to make sandwiches when you don’t have any bread, heh. No complaints from him, though!

I made myself a plate of veggies and a couple fried eggs. A great lunch to help us get rid of our leftover veggies and kept us full until we got back home 5 hours later. Are you planning any camping trips for the summer?

This entry was tagged: camping