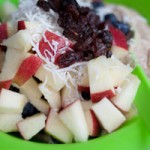 Kevin and I are both outdoorsy people. We’ll come up with any excuse to head to the mountains for the weekend, could spend an eternity camping under the stars, and have started collecting random trail guides for various parts of the country on the off chance we ever go for a visit. When the weather finally began to get a bit nicer around here, we decided to brush off our camping gear and head out on a 4 day camping trip. We braved the crowds and traveled 4 hours south of Calgary to Cypress Hills Interprovincial Park – the only campground in Alberta that still had a couple of sites available to reserve for the long weekend.

As I mentioned on Friday, we had planned to get an early start to the day and be on the road by Thursday morning but various hurdles made it impossible for us to make our way until 1pm or so. We still made good time, getting to the site just after 5pm. There are a bunch of different campsites within Cypress Hills Interprovincial Park – some on the Alberta side, others on the Saskatchewan side. Luckily we didn’t have to drive all the way to Saskatchewan to guarantee our spot. We chose a walk-in site at Reesor Lake, a 17km drive from the main campground at Cypress Hills. Reesor Lake is quiet and made up of approximately 50 campsites.

After we unloaded the car, it was decided that I would be in charge of assembling the tent and Kevin would try his hand at erecting the cooking tent. That thing is a pain to put together, so I didn’t complain when the tent poles kept popping out of their sockets and jabbing me in the arm. Small price to pay for sanity.

Once I had the sleeping tent put together, cot, sleeping bags and all, I decided to help Kevin with the cooking tent. And when I say help, read – take pictures.

We managed to have our space set up in under 1.5 hours, not bad!

We spent the rest of the evening touring the the park, stocking up on firewood and playing card games. Friday morning started early for us… by accident. I had forgotten to cancel my weekday alarm, so it woke us all up at 4am, dogs included. We all tried to get back to sleep but it just wasn’t working for us. We started the morning with some happy tummy breakfast pudding and lounged by the campfire until 10am when we decided to head into Medicine Hat to get some groceries, have lunch, and tour the city a bit.

The campground was about 1.5 hours from Medicine Hat, a city of about 60,000 people. A quick Urbanspoon search for gluten-free restaurants in Medicine Hat lead us to Zucchini Blossom, a gluten-free friendly cafe just off the Trans Canada Highway. Review of this tasty spot coming soon ;)

We got back to the campsite around 5pm, just in time for me to get started on dinner – vegetable medley with lean and clean turkey burgers on gluten-free burger “buns”.

Following dinner, I did the dishes while Kevin prepped for a fire. We sat at the fire for a bit, then went to bed at 9pm. Rough life.

For breakfast on Saturday, I scrambled leftover burger with egg and peppers for Kevin and whipped up a breakfast pudding for myself. That stuff is magical, seriously. My tummy often gets a bit upset when traveling, camping included, but my digestion didn’t experience any issues during this trip. The power’s in the pudding!

I was a bit disappointed with the layout of the walk-in campsites at Reesor Lake. Each site had about 2-3 feet between one another with absolutely no privacy. The picture below has 3 campsites in it. Come Saturday morning at 8am, the place was bumping with activity!

We remembered driving past a small cafe in Elkwater, the townsite on Elkwater lakeshore, so decided to make our way into town in hopes that it would be quieter than the campground.

We were pleasantly surprised with the cafe! It had internet, which we didn’t use… until Sunday, fresh baked muffins, breads, cookies, and loads of teas and specialty coffees.

I’d hoped that perhaps there would be at least one gluten-free goodie… but there wasn’t. I did make a request, though!

We ordered two large teas and a fresh-baked cinnamon bun for Kevin. The cinnamon bun looked absolutely divine, soft, gooey and fresh out of the oven. After enjoying his cinnamon bun in silence, Kevin went on to proclaim that it was the best he’d ever had… ever.

Once the cinnamon bun was out of the way, we got lost in a couple of games of Monopoly Deal. If you haven’t played this game, you must! It goes so much quicker than the board game version and requires far more skill and forethought. I beat Kevin the first couple of games, but he had me schooled for the rest of our trip. I challenged him to a rematch when we go camping again early August. Watch yourself Kevin, I’m coming for you!

We headed back to the campsite around 1pm and were pleasantly surprised to find that everyone had left for the day, leaving us with the whole space to ourselves! We made a quick lunch of soup and salad, then went for a 3 hour nap.

Napping is a camping necessity. Some people hike when they go camping, stay up really late, or drink a bunch of beer… Kevin and I nap.

Then we wake up while everyone is preparing dinner and we’re fresh and ready to go. Just look at that face, hah!

This entry was tagged: camping

Video: How I Stopped Binging on Carbs

All About Keto Carb Ups and Cyclical Ketosis

Imbalances That Cause Cravings on Keto