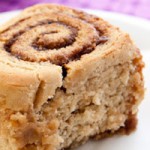 They say good things come in threes. Over the course of last 6 days, I’ve developed two different cinnamon bun recipes yielding over 65 individual cinnamon buns, a stuffed freezer, and a very, very happy cinnamon bun loving boyfriend. I think it’s safe to say that good things can come in twos as well and end it there before anyone gets hurt.

Remember the part in Fantasia when the brooms keep multiplying over and over? Pretend the brooms are cinnamon buns and the buckets glasses of almond milk. That was the scene of our kitchen as I finished my 5th batch of rolls on Sunday.

Oh, and Mikey Mouse down there? He’s the gluten being trampled by the awesome gluten-free cinnamon roll. You don’t need gluten to make a good cinnamon roll, Mickey. Get with the times!

Kevin loved last week’s batch of rolls so much that he said if I didn’t post the recipe on the blog I’d be knowingly letting down everyone, so I went for it. As time passed all I wanted to do was get into the kitchen to take another crack at perfecting the recipe to the soft, melt in your mouth, gooey, liquid bottom I’ve dreamed of all these years on a gluten-free diet.

And crack I did. Twice just to make sure the recipe was right. Then again for good measure.

Oh my gosh I’m so happy my freezer is full of these things. And even happier that I get to make yet another batch on the weekend for my Mom. I’ll be a pro cinnamon roller in no time. Hire me?

Inspired by my gluten-free cinnamon buns

Once the buns have had the 30 minutes to rise in the pan, they should look something like this. Resist the urge to poke your finger into the sauce. Don’t do it!

As they’re baking, the smell of cinnamon will dance through your house and may even get the neighbors curious.

Maybe make a second, third or fourth batch for your neighbors. You’re going to want a whole pan just for yourself.

Signs You’re on a Crash Diet, Why You Want Off, and How To Do It