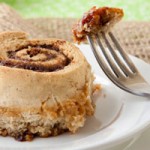 How was your weekend? Ours was relaxing and mellow, just what the doctor ordered.

I was so tired come Friday that our plan to hang out with friends ground to a halt when I accidentally fell asleep on the couch at 7pm. I woke up around 4:30am on Saturday; as I do every weekend, but had absolutely no desire to get out of my pajamas. Instead of fighting the urge to have a lounge day as I generally would, I embraced it fully. I hung out in bed for awhile, then crawled out and cuddled up to my book. My purple office; just down the hallway from our bedroom, is complete with a big comfy chaise lounge, perfect for Saturday mornings just like this one. I may or may not have dozed off a couple times here and there but managed to get a bit of reading in.

I was warm, comfortable and completely relaxed… until I got hungry. I had all the time in the world to figure out what I really felt like eating instead of relying on the usual Saturday morning plate of pancakes. Then I had an idea, I wonderfully awesome idea. Cinnamon buns. A little bit of research into gluten-free cinnamon buns, and I was off to the kitchen to create my very own.

I became quite the professional at making my own cinnamon buns as a kid; with a little help from the Doughboy, of course. That was until I learned how to make them from scratch in my grade 8 home ec class. I’ll never forget how satisfied I was biting into my very own homemade cinnamon bun. It was life changing.

I remember there being two types of cinnamon rolls – the harder roll with a gooey bottom, or the tender roll with sweet glaze. I was never too fond of the sweet glaze on the roll; perhaps it’s because I ate the glaze before the rolls were done and never had the opportunity to combine the two, but that’s beside the point. My heart was torn on which cinnamon bun to make. Hard, soft, hard soft? I decided to switch things up and go for a soft roll with a gooey bottom but in the end, the consistency of the dough forced me to go in a different direction. The result still wowed us but I was a bit disappointed that I didn’t get the consistency I was hoping for. Because of this I wasn’t going to even post the recipe but Kevin said I would be crazy not to share (this was as he had his third cinnamon bun in his hand), so here goes!

The recipe calls for soy milk powder. If you can’t get your paws on any, coconut milk powder like the one shown below would probably work, too. That or protein powder, almond flour, or maybe a tablespoon or so of sifted coconut flour.

Freshly ground flax seed helps hold everything together instead of opting for the gums often used in gluten-free baking. The gooey bottom is a must for any cinnamon bun if you ask me. Generally, you just heat the ingredients until everything’s incorporated, but I went a step further and caramelized the sugars so they’d be sticky like taffy at room temperature.

I haven’t invested in a Kitchen Aid stand mixer yet, so as I did with my gluten-free naan, these gluten-free rolls were made in my food processor using the dough blade and setting. If you look far off in the distance to the left you’ll see lentils on the counter sprouting for the lentil granola I’m planning to make this afternoon. Wish me luck!

I made sure all of the dry ingredients were fully combined before adding the wet ingredients. It’s a bit challenging when you’re using a food processor, but it’s still manageable!

Once the wet and dry ingredients have been mixed thoroughly, add the warmed milk. After the 3 minutes are up, the dough should be soft but not sticky. If you poke your finger in the mass and you get a bunch of dough stuck to it, add a tablespoon or so of brown rice flour and mix for another couple of seconds.

Rolling the dough out on plastic wrap works marvelously for cinnamon buns. A trick I learned back in home ec!

If you use a knife to cut the dough it will make a mess. Using a string will help to maintain the form of the roll.

As I mentioned above, when I do this again I’ll be using a smaller pan so that the rolls are tighter and more uniform looking.

Regardless of the look of these cinnamon buns, they were exactly what I needed this weekend. Have a fabulous Monday :)

The Most Popular Grain-free, Paleo, Dairy-free Recipes: My Picks + Your Favorites