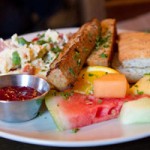 Kevin and I recently visited The WilderNest Dream Cafe in Inglewood, Calgary for a highly recommended gluten-free breakfast. We’ve been hearing about this place for ages but took over a year to finally check it out. It seemed every time we were in the area and feeling a bit peckish, it was closed! Being that they’re a breakfast and lunch place, their varying hours of 7am to 3 or 4pm make sense. We’re just rarely around that part of the city during work hours.

Wildernest is independently owned and operated and has been serving up home-style breakfasts to Calgarians since 2009. It’s nestled in a renovated house on 9 Ave. S.E, creating a comfortable, laid back, and cozy atmosphere for it’s patrons. Between this relaxed atmosphere, menu selection, price, service, and food presentation, the atmosphere made the strongest impression on us.

The breakfast menu includes classics like French toast, frittatas and your basic omelet,

to original, more creative items like savory French toast, Hawaiian scrambled breakfast wraps, or green eggs and ham. I’ve read many reviews claiming that the items on the menu are over priced, but I didn’t get that impression come the end of our meal.

Our waitress; who seemed quite rushed, explained that anything on the menu could be made gluten-free; with bread they receive from GF Patisserie, minus the pancakes and French toast. I couldn’t decide between the Greek and Hawaiian breakfast wraps so Kevin and I played rock, paper, scissors (best out of three) to help me make a selection. Hawaiian it was! Kevin struggled with what to order, too. It was a toss up between French toast and banana buttermilk pancakes, so he asked the waitress to decide for him. She highly recommended the pancakes, so that’s what he went for.

While we were waiting for our breakfast, Kevin ordered a decaf coffee. We expected it to come to the table as any coffee would in a breakfast place like this – in a carafe. But were pleasantly surprised when a platter was placed on our table with fresh pressed coffee, timer and all.

This made Kevin very, very happy. And… I was just smiling because we were out enjoying breakfast which meant I didn’t have to wash any dishes! woot!

Our breakfast came to the table quite quickly; about 15 minutes. Kevin’s pancakes looked fluffy, sweet, and banana packed!

The breakfast wrap (which comes in the form of scrambled eggs with gluten-free toast when ordered gluten-free) didn’t come with any sides, so I decided to add a side order of hash browns and Spolumbos chicken sausage to the mix. The Hawaiian eggs were delicious and made me question why I hadn’t added pineapple and ham to my scrambled eggs sooner. I’ve always sucked at making scrambled eggs at home. They’re either too runny, or too dense, but these were juuust right. The sausage was an interesting consistency which looked more like tempeh than sausage, but still tasted great. The gluten-free toast was amazing, but the jam was way too sweet, so I opted for dry toast instead.

Had I been told how big the side order of hash browns was, I never would have ordered it. I ended up having 3 bites before throwing in the towel, too full to carry on. They were great hash browns, a bit on the spicy side; which I like, and made with a medley of yam, white potato, tomatoes, and green onion. I just hated wasting all that food!

But I did enjoy taking pictures of it!

Kevin laid down the maple syrup and went to town on his pancakes. He was expecting banana goodness to explode in his mouth, but was slightly disappointed. They didn’t really taste like anything. They were good, but had he not seen the banana chunks on the tops of the pancakes, he never would have guessed they were intended to have banana flavour.

If it weren’t for my gluten-free limitations, we would sum our visit to WilderNest as a pleasant one, while understanding that it’s definitely not the best breakfast place in Calgary. But because it’s such a challenge to find gluten-free restaurants, I have a feeling we’ll be back to Wildernest when we’re in the mood for a simple breakfast out on the town.

#071 Does Your Body Hate Keto? with Allie Bittner

What You Can’t Do