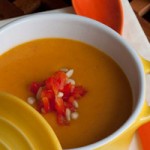 You’ve heard the saying “When life gives you lemons, make lemonade”… but what if you’re OUT of wine? This was the predicament I was in today when I decided to make butternut squash & pear soup. What did I do? Well, the title says it all. I replaced the wine with ginger ale and began adding warming Daal inspired ingredients to balance things out. Another pureed soup for the books! This stuff is like crack magic.

Keeping the skin on

I can honestly say I’ve never peeled a carrot, a potato, sweet potato, cucumber, apple… the list goes on. If a recipe calls for the vegetables or fruits to be peeled I really, really, really try to avoid peeling them. Unless it’s a pear on a cake [more on this later] Vegetable [and fruit] skins are LOADED with fiber, antioxidants and phytonutrients [specifically polyphenols]. It’s believed that the phytonutrients in foods lay up against the skin walls. Peel the skin off, and you’re removing key natural nutrients. And who likes peeling anyways? It takes up far too much time. Take advantage of this time saver, be lazy, and create a healthier meal! Recipe #5 in the Winter: A Time of Hibernation series. Also, prepared for Go Ahead Honey It’s Gluten-Free.