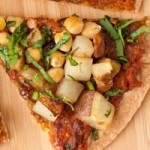 Thank you for your support and positivity on Friday. You’re such a great bunch ;) I’m so pumped to start this next chapter in my life and share my experiences with all of you. Knowing that there’s only 100 days between me and the first day of the rest of my life is so exciting.

Come Friday I was ready to celebrate! Growing up, pizza always marked a celebration of some sort. A friend’s birthday, the end to a busy week, Mom leaving the house to my Dad, littler sister and I. Whenever there was pizza, there was a party! Any guesses on what we had Friday night to ring in the changes? Pizza! But not just any pizza, this baby was loaded with Indian inspired ingredients and a sweet and savory masala sauce. Curry on a pizza. My life is complete.

Emeril Lagasse’s recipe for hash browns has me addicted to roasting potatoes in my cast iron so it was a no brainer on how I was going to prep the potatoes for this pizza!

Generally you’d add a bit of sugar to the sauce to soften the acidity of the tomatoes but I opted for raisins to give some of the sweetness. When I blended the sauce, I kept it a bit chunky so there were bits of raisins throughout.

10 minutes in the oven, and Bob’s your uncle!

The trick to using the brown rice tortillas as a pizza crust is in the crispness of the crust and the consistency of the ingredients. Had I steamed the potatoes or used fresh tomatoes, it totally would have fallen apart. If you don’t have tortillas, no worries. Any crust will do the trick. If you’re feeling a bit crazy, you could also try using a gluten-free naan as the base. I was going to try it until I realized I’d eaten the last naan for breakfast on Friday morning. Hey, who said naan wasn’t a breakfast food? Throw some sunflower butter on there and you’re good to go!

Strategies To De-Stress Your Body & Mind

Video: 12 Bad Fats and What They Do To Your Body