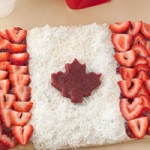 Canada Day is a big event at our house. We throw some meat on the grill, gather up as much Kokanee as we can, and blare the tunes. All in the name of this beautiful country we call home. This year, I wanted to do something a bit different. Of course there will be potato salad, steaks, burgers, and endless potato chips, but why not throw some [healthy] dessert into the mix?

I’ve never made a homemade pizza crust that didn’t come out of a box [gasp!] so when I was planning this recipe, I wanted to take it for a test run before I needed it. What’s worse than a mushy pizza? A mushy pizza 2 hours before the barbecue begins. Thankfully the test run was a success! And, it also doubles as a fantastic breakfast, so none of it has gone to waste. I can assure you that!

I bet you could replace the egg in this recipe with 1 flax eggs. Combine 1 tablespoon of freshly ground flax seed with 3 tablespoon of water and let sit for 5 minutes, then use as you would an egg.
3.3.3070
View Nutritional Information (once on page scroll down)

I bet it’d  be easy enough to make an American flag too!

Mmm breakfast… The pizza was so big! I have no doubt that it will feed 12 people and then some. I let the pieces chill overnight, then wrapped them in plastic wrap and stuck them in the freezer. The crust freezes really well!

I doubled the recipe and ended up whipping together a dinner style pizza, too! I followed the same directions above, but didn’t allow the crust to cool. Instead, I topped it with toppings, and placed it back in the oven [on broil] for 5 minutes, or just until the cheese was melted. The dinner pizza version was missing a bit of the tang that regular pizza dough has. I think next time I’ll try to increase the apple cider vinegar to see if that helps it slightly. Other than that, it was delicious and a fraction of the cost of a store bought gluten-free pizza mix.

It was the first time I’d tried chopping the topping ingredients in the food processor. It was so easy, and the pieces were small enough that they cooked really well in the 5 minutes they had under the broiler. My life has been full of pizza eating this week, and I don’t mind it in the slightest!

Are you having a Canada Day/Independance Day shindig? What types of foods do you like to make for barbecues?

This entry was tagged: pizza

Video: 10 Things You Shouldn’t Do on Keto