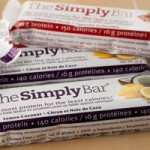 Winner update November 10 – congratulations, Micah! You’ve won the giveaway! I’ll contact you soon for you details. Thanks for participating, all :) ~~~~~~~~~~~~~~~~~~~~~~~~~~~~~~~~ I’m always on the lookout for gluten-free, vegan protein bars. While I definitely don’t rely on them on a daily basis, I like to have a backup of protein with me when I’m on the go, just in case. About a month ago, I was at bulk barn picking up the usual coconut flour, chia seeds, and arrowroot starch, when I saw a new bar glistening on the shelf. Being the skeptic that I am when it comes to new products, I picked it up guessing it would likely have gluten, dairy, corn, or yeast, too much sugar, or just garbage ingredients. I began reading the wrapper: 16 grams of protein, 140 calories, low fat, gluten-free, vegan, low glycemic… sounded promising!

Cinnamon ingredients: Non GMO soy crisps, agave, brown rice syrup, cashew butter, raisins, cinnamon, natural flavor. I’m not a huge supporter of soy and try to limit my intake to no more than 2 servings per week. When I do eat soy it has to be non-GMO. No questions asked! I was a bit concerned with the agave and brown rice syrup, but was happy to see that these bars only have 8 grams of sugar, so there’s not too much sugar in them.

Since finding these bars at BulkBarn, I’ve also seen a limited selection of flavors at Superstores, and a couple of random gas stations. Louise over at TheSimplyBar was kind enough to send me a couple of additional flavors I hadn’t tried before. Cinnamon pecan is delicious but I can’t find it in stores anywhere! All in all, these bars are much better than many of the other protein bars out there. They’re great for those with poor digestion (such as myself), have simple ingredients, and give you a boost of protein with the lowest amount of calories I’ve seen in a bar… ever. I’ve enjoyed them as a quick pick-me-up during a couple of ridiculously long days, and generally pair with an apple and a handful of almonds for a complete snack.

The review I’ve supplied above is my own personal opinion, which I was not paid for.

Freshover: 10 Things Standing Between You and Thriving Health