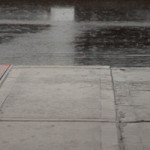 Right around this time last month, I participated in my first 10km race. It was raining, but I managed. For this race, we experienced torrential downpour. No word of a lie, there were times where closing my eyes and running was better than keeping them open and drowning my eyeballs. But, I did it.

We woke up a couple of hours before we had to go so I could share my kale chip recipe with you all, and have a protein packed smoothie. My [sleepy] smoothie contained: The race started at 8:20am and was an hour from home, so we left at 6:15 to give us time to pick up my race bag. I don’t think we needed to leave as early as we did, but oh well! Once I had all my goodies, we headed back to the car to check up on emails and hang out for an hour. I packed an apple quinoa cake with me, so I snacked on that too. This hour of waiting, staring out at the rain was torture. 20 minutes before the race was set to begin, I decided I wasn’t going to run. Running in rain and thunder is not a good time, running is supposed to be fun, right? Then a bunch of thoughts floated to the surface: And with that, I grabbed my running belt, music, gloves and went inside the complex to do my warm-up routine.

The course was 1 loop, which was nice because I knew what to expect on my way back. Kilometer 4 was one big hill, which I made up perfectly [thank you hill training!]. One thing that took me by surprise is that we were running on this red gravel stuff. When wet it just turns to mud, so… that was fun. Other than that, it was smooth sailing!

It was a very, very slow start. The path we started on allowed for absolutely no passing. Everything was muddy, people were falling, it was just bad. It took about 15-20 minutes for everyone to spread out. While I was out running, Kevin was tucked away on the side of the building. Brrr…

It was frustrating not being able to pass people until 15 minutes into the race. My goal was to maintain a pace of 6:15min/km [or 9:59min/mile]. Pace is a marker you can use so that you know how hard to push yourself and still have enough energy to finish the race, something I didn’t do during my first 5k. Kilometer 4 ended with a large hill. It wasn’t a steep incline, but it went on for a good while. Not to worry though, I killed it!

I really stepped it up a notch on the way back. There was just 5km left, I knew what to expect in the course and I went as hard as I could for as long as I could. The wind started up at the 7th kilometer which really sucked. Water was pooling in my sweater, my pants sucked up a lot of rain, and my ear buds started making a fizzing noise and stopped working. Once I turned the corner and saw the finish line lite up with 1:01:00, I pushed myself as HARD as possible to get in under 1:02:00.

Banana, towel, nap in the car, buckwheat + chicken risotto. In that order.

I finished at 1:02:28 and an average pace of 6:13min/km [my last race was 6:51]. This tells me that my knee is getting stronger, my body is getting fitter, and I still have a ways to go until I’m at my peak. My ultimate goal this season is to get to a 5:30min/km pace [or 8:51min/miles]. I ran at an interval set of 10 minutes and rested for 1 minute. All in all, I had to stop to walk a total of 5 times or, 5 minutes. The below is all in kms… I am NOT the speed demon that many of you thought I was during my last race recap!

Things I need to work on for my next race…

This entry was tagged: race recap