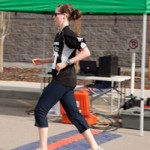 If you would have told me 1 year ago today that I’d be running because I love it, I would have thought you were nuts. And running in a race? I’d think you were on drugs! I had such a great time today. I was so nervous the days leading up to my first race. But I reminded myself of a time when I was afraid of deep water running, masters swim classes, and spin class. They didn’t turn out all that scary! I’m so happy I did this. I was bummed that I couldn’t do the 10k. It gets discouraging when your body + mind are up for the challenge, but your knee just wont conform. What I’ve learned though, is that it’s important to listen to your body than push yourself too hard and end up even worse off. So, I had to accept that the 5k was all I could do. Thankfully the race started at my gym so I took the opportunity to warm up on one of the spin bikes for 20 minutes beforehand. I maintained an rpm of 112 and kept my heart rate at 168bpm. A perfect warm up. Next thing I knew I was off the bike and outside with the rest of the runners. First thing’s first, have to set the white balance!

The sun was shining, it was a beautiful day! I was so nervous.

It took me awhile to figure out how that darn shoe thing worked. But I got it! [so glad I shaved this morning! Bow chicka wow wow]

And we’re off! Great thing is that I managed to finish with a couple of the people I started with [ie: lady in the white + pink outfit] Note to self – buy white and pink outfit. It’s so cute!

Challenge: keeping my personal pace and not worrying about other people. Proud: that I gave myself time to rest. I stuck with a run 7min: walk 1 min interval the whole time. It was hard because I just wanted to RUN FAST like everyone else! But, I just kept telling myself that no one cared what I was doing and I had to stick to my plan to avoid injury. Surprised: at how tired I was afterward. I run 5km at least 3 times a week, no problem. But there was wind, so much mud and water, and I was boiling hot in that darn shirt. Lessons:

Here I am coming back!

The wind was so strong the entire race and we were going against it for a good 2.5km.

I got much better as time went on, which is fantastic! I started running toe to heel vs. heel to toe at about km 4. It felt so much more natural. I thought it’d be fun to go through my Garmin history to see what pace I was running in August [before my injury]. My best pace was on August 22nd at 6:54min/km. I remember that run. It was the best one I’d ever had. I pushed myself as hard as physically possible. 8 months later, torn patella adventures, and many a physio, chiropractor, ART, and athletic therapist appointment later, my pace has improved. Mission accomplished. Sign me up for the next one. I’m hooked!

Why I Threw Out My Mattress + Replaced With intelliBED

Nutrition educator + keto enthusiast. I want to live in a world where every woman loves her body, nourishing fats are enjoyed at every meal, and the word “restriction” isn’t in the dictionary.