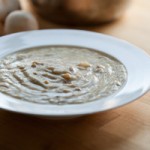 When we first met, Kevin knew he was sensitive to lactose but ate it anyways because he didn’t think there were any other options and had no familiarity with dairy-free recipes.

He had Parmesan on his pasta instead of nutritional yeast, shredded mozzarella on his pizza instead of vegan cheese, 1% cow’s milk in his cereal instead of almond milk, and endless bowls of cream of mushroom soup. No matter how aggressive his symptoms were; acne, stomach pains, headaches, sleepless nights, he continued to eat the thing that was hurting him. It was painful to watch. It wasn’t soon after we met that I convinced him to make the dairy-free switch his body so obviously needed.

One of the only things we couldn’t solve during the switch was a replacement for his beloved cream of mushroom soup. He yearned for that soup for a long time until I mastered the recipe a couple of years ago. It’s a great recipe but calls for a lot of flour. Like, copious amounts of it. I was still making it for Kevin but now that I’ve committed to living grain-free for awhile it meant that I couldn’t enjoy a bowl alongside him. Not cool.

Then I had this crazy idea. A crazy, marvelous, awfully fantastic idea… vegan, grain-free cream of mushroom soup.

Given the success I had with my latest cauliflower soups, I figured cauliflower would give a good, thick consistency to this cream of mushroom soup. Boy was I right, it’s amazing. All the thickness of a cream soup with no powdered thickener. No starches, flours, or gums. Just whole food (dairy-free) goodness.

To print, email or text this recipe, click here.

View nutrition information (once on page, scroll down)

I like white mushrooms in cream of mushroom soup, but you could experiment with all sorts. Make sure to dice them up nice and small for the perfect consistency!

While the cauliflower mixture is boiling, you can saute the onions and mushrooms. The browner, the better.

You’ll know when the cauliflower is done when the sides of the pot begin to have little pieces of cauliflower on them just like the picture shown on the right.

Puree the cauliflower mix, add it to the sauteed mushroom mix and stir. Place back on the heating element and cook until desired consistency is met. The longer you cook, the thicker it will be. We like ours really rich, so I simmered the soup for 10 minutes.

Serve as is, or with a side salad.

Oh man, this is so good. Authentically, amazingly good.

Whether you’re vegan, dairy-free, or just looking to add some variety into your meals, you’ll be hard-pressed to ever have the real thing again.

Other deliciously fantastic vegan soups on the web: