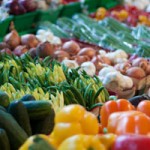 Monday, our second day in Montreal, was bright and sunny with very little rain. There was the odd shower here and there, but nothing like Sunday. I’ve never seen rain so violent.

We began the day with breakfast at Cora’s. Kevin ordered a crepe plate with loads of fresh fruit and a slice of French toast buried underneath. I ordered a fruit smoothie and paired it with water + sprouted rice protein powder and a homemade grain-free blueberry muffin topped with organic raspberry jam and coconut butter that I’d brought from home. It was delicious! After breakfast, we headed back to the hotel to work for a couple of hours before we went exploring for the day.

Right before we left, I indulged in a bowl of almond yogurt with flax oil, ground flax seed and banana chunks. To say I was excited about going to Atwater Market was an understatement.

If there’s anything I’ve learned about living a healthy life, it’s that you have to learn how to laugh with yourself. Just look at those flared nostrils and beady eyes! Ha, I crack myself up.

The concierge at the hotel provided us with a map which I used for about 2.4 seconds before dumping it in the trash and bringing up my maps app on my iPhone. I would die without that app, seriously. Montreal, Vancouver, London, India… I’m pretty sure I’d still be lost in Mumbai had I not had it with me.

The metro in Montreal is really easy to understand. The stations are within a close proximity to each other so you can always find a place to jump on, it’s well-priced, and comes often. Every place we chose to visit during our trip was on the line and easy to get to. A drastic change from the public transportation in Calgary.

A couple of stops East of our hotel was Old Montreal, the oldest area in Montreal dating back to the 1600’s. I’d visited Old Montreal as a teenager with my family when we’d stopped for a couple of days on our way to Maine one summer. I remember it being magical, romantic, full of life… and cute French boys. Hey, I’m just being honest!

Going as an adult was much different. This time, I marveled at the architecture. We wanted to explore Notre Dame Basilica, but with an entry free of $5 a person, we chose to sit on the steps and sift through pictures of the basilica using our iPhones instead.

It was the next best thing if you ask me! I could have explored all day but we were on a schedule so had to hurry along to see everything we’d wanted to see before Kevin returned to work on Tuesday.

We hopped on the metro and headed to Lionel-Groulx station, a couple of blocks North of Atwater Market.

We walked passed Eglise Sainte-Irène, a church on Atwater Avenue, and decided to step in to check it out. It was no basilica, but it was gorgeous nonetheless!

A couple minutes walk and we were there, Atwater market at it’s finest! There were rows of fresh berries,

and a couple of gluten-free items, too!

The market itself was pretty small. With all the outstanding reviews I’d heard of the place, I imagined it being filled with endless rows of farmers, merchants, and the like, music, flowers and shops… but it wasn’t. It was nice, and had good produce, but I felt like the magic I’d imagined was missing. Thankfully, I shared my thoughts on Facebook and many of you suggested I check out Jean-Talon, another market in the city. And boy, were you right…

It was the BOMB! But that’s a story for another day.

This entry was tagged: montreal