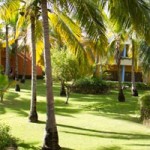 How quickly our Dominican trip escaped us. We were so sick those last couple of days that I didn’t get to share all of our adventures! Better late than never, right?

Wednesday’s dives were fantastic. The weather was much warmer than Tuesday; the sun was shining and there was no rain! Wednesdays schedule had us heading to Catalina island; on the southeast coast of the Dominican. It’s a protected Natural Park, so there are no buildings and a vast array of wildlife. The plan was to complete 2 dives – “The wall” and “Aquarium”. Both were great, but I’m a sucker for sea walls, so you can only imagine how giddy I was when we were told which sites we’d be touring.

We were told that the wall drops more than 330 feet with two impressive ledges at 83 feet and 132 feet. The slope from the beach to the wall was unreal. Every part of the sea bottom was riddled in sponges and coral! The aquarium had great coral formations and a bunch of really neat looking fish, although I’m way more interested in the coral that the fish.

We stopped off at Catalina in between our dives, for some lunch and rest. The lunch looked far better than the one served at Saona island (the spot we toured on Tuesday), but it still was not gluten-free. Although we were told that the food would be safe for us to eat, there was nothing we could have at either. Thank goodness for the back-up plan – a huge cooler bag with two to-go containers from last nights’ buffet dinner!

Never the less, the stop over gave us a chance to peel off our wet suites and bask in the sun for an hour or so before we headed out for our second dive.

After that, there was still a bit of time leftover, so we headed over to this secluded town on the top of a gorgeous hill looking over the river with the Dressel Divers crew. I was this as a perfect opportunity to lay down in the shade for some quick shut-eye.

Although Kevin made it pretty impossible to get any resting in…

He kept poking me trying to wake me up!

On Thursday, we headed out for another 3 dives, but ended up getting ridiculously sea sick and had to sit out for the first two dives of the day. I’ve never been so violently ill in my entire life. The group was kind enough to drop us off on Saona island while they completed the second dive so we could stabilize a bit. I felt right as rain within minutes of grounding myself in the sand and was ready to get back on the boat and get my dive on!

We got back to the hotel pretty late on Thursday; around 9pm, and decided to take it easy on Friday. We had a cacao plantation tour planned, but I had a feeling I would be in no shape the next morning to do anything but lay on the beach, listen to music, and read The Hunger Games.

And boy was I right! We both woke up on Friday with incredibly sore stomachs, drained energy, and major upset digestion. Dominican Republic’s tap water is not potable and can be lethal if consumed. Well, maybe not lethal, but from what we went through, it was pretty darn close. Needless to say, this turn of events kept us pretty tame for the rest of the vacation. We did however, manage to take another tour of the Iberostar Bavaro property before we began making our way back home. One of the tasks on our list was to find an ATM and grab some pesos for various items we wanted to buy at the shops along the ocean. This proved to be so much more challenging than anticipated. Basic math while your sick sucks.

4 hours later (heh, just kidding) we were off to the shops!

On our way back to our room, we found this amazing green house space with all of these expansive plants in it! There was a worker there who tried to communicate; in Spanish, the names of each and every single plant in that green house, along with what I think was the plants’ history. We were there for awhile. I wish I could say I learned something, but I couldn’t understand a thing he was saying. His passion for his job was inspiring, though!

The trip home was pretty uneventful (as they usually are), other than Kevin deciding to book a hotel at the Montreal airport last minute so we had a bed to sleep in for our 7 hour stopover. Great idea when you’re not feeling well and just want to get home to your nice warm bed. Have you been on any vacations lately? If there was one place in the world you could visit, where would it be?

#M27 Keto Life on a Sailboat

Healing Your Relationship with Food and Your Body