Grilled Mini Inside Out Apple Pies 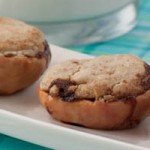 Every time I step foot outside after around 3pm, I smell barbecues. Everyone’s out on their deck, enjoying the sunshine, a juicy burger, and an ice cold beer. Sadly, because of all the yard work we’ve had to do [aka pay for], there will be no barbecue purchasing for awhile. For this reason, I’ve been conditioned to believe that an indoor grill = barbecue. I like to also believe that these miniature apple pies would work lovely on a barbecue. Because what comes from barbecue and doesn’t taste ah-mazing? Ya, that’s right… nothing.

If you’re like me and don’t have the outdoor equipment or, you’re sans indoor grill, don’t fear. You can make these babies in the oven. In fact, they look prettier when they come from the oven, but they’re tasty just the same. In the picture above: the left pies came from the grill and the right from the oven.

Cutting the apples in half should be relatively easy [did you ever make apple stamps out of halved apples? They make such a neat imprint!]

I removed a bit too much apple flesh from these apples making the dessert a bit doughy. Next time, I’ll go with 1.5 tablespoon removed [as I’ve listed in the recipe]

Spread cinnamon mixture inside the apples.

Don’t forget to lick your fingers!

Then stuff with crust.

These are insanely delicious, and much better for you than traditional pies. The portion sizes are smaller, and the sugar and fat content is massively reduced. They’re also great cut up and used as an oatmeal toppingl!

I didn’t have any ice cream and didn’t want to whip up a batch for this very occasion, but it would be nice to serve these with a dollop of ice cream on top.

This entry was tagged: pie

Why I Threw Out My Mattress + Replaced With intelliBED