The Little Tart That Could 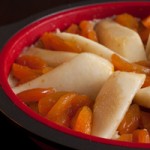 Looks good doesn’t it. It fooled me too. I really thought this one was a winner. Last week my mom passed on a pear apricot tart recipe she’d found in a Real Simple magazine. It looked fantastic and had loads of gluten free and healthful potential. So, I decided to make it this past weekend. I toyed around with the beginning stages of the recipe – measurements, ingredients… and decided that I’d make it vegan too! I seem to be on a vegan trend right now. [It goes in waves.] I decided to experiment with the Bob’s Red Mill coconut flour I received last week. Which; by the way, smells fantastic! Coconut flour is extremely high in fiber, protein, and makes for a great addition to any household. I’ve just started adding 1 tablespoon of this coconut flour to my berry smoothies in addition to ground chia, and love the taste!

So, back to making my awesome gluten free tart. I was confident of the adjustments I’d made to the recipe and was ready to take the plunge in the kitchen! This is where the adventure really began.

Attempt #1: was too dry. It tasted FANTASTIC… but it was a bit too overdone. Why I didn’t just bake this attempt for a shorter period of time is beyond me. Attempt #2:  was raw through and through. Attempt #3: didn’t I say I was aiming at making a tart? Somehow I ended up with a coconut cake :| Attempt #4: the bottom was burnt and beyond recovery

Needless to say, my kitchen has been in a disarray since beginning this project. But, in honor of gratitude and positive thoughts, I thought I’d take a moment to share the valuable lessons I learned trying to make my first tart. I know how to make coconut cake. I’ve learned that our dogs love tart/cake. I’ve noted that 8 flax eggs in anything, even if the coconut flour rule book says 1 egg per ounce of coconut flour, is a very, very bad idea. Unless you want to swim in your tart. If this is the case, I’d be more than happy to send you the recipe. Lastly, I’ve come to the realization that maybe it’s best to walk away from things for a bit, mull it over, regroup, and revisit it in a couple of weeks. And that’s exactly what I am going to do. Stay tuned for what I promise will be the best darn pear apricot tart recipe you’ve ever seen. Ever.

Keto: What I Eat in a Day