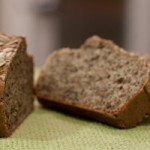 I was ridiculously sick this week. I tried to fight it on Thursday, desperately trying to stay caught up with everything life was throwing at me but after waking up early on Friday and feeling like I’d gotten hit by a bus, I decided to actually listen to my body by staying in bed and letting nature run its course. It was then that I decided to read a couple of cookbooks; yes, this is what I do on my spare time and I love it! The first, and as it turns out, last cookbook that I read while in bed (passed out for most of the day and didn’t get much reading in) was Elena’s Gluten Free Almond Flour Cookbook. I had bought Elana’s cookbook ages ago. When I stumbled onto her website last year I was thoroughly amazed at the creations she had put together. Having been inspired by reading through her cookbook and feeling a lot better on Saturday, I decided to make my first loaf of gluten free bread. While it was baking I was dreaming of all the things I could do with the bread – sandwiches (without having to toast the bread!), tuna melts, french toast, bread and butter (coconut oil that is). When it was finally done I sliced it up, took a picture, slapped some coconut oil on a slice and dug in. Had I known homemade gluten free bread could taste this good, I would have started making it years ago. The almond flour really gives this bread a unique taste as opposed to using rice or bean flour. Honestly, I’ve never cared much for any gluten free flours I’ve worked with. They have a funny after taste, require a lot of xanthum gum (which contains corn), and many of the muffins I’ve made could easily pass as weapons. So needless to say I’m pretty excited to have finally found a type of flour I can really work with! Almonds are high in calcium, protein, low in carbohydrates (not like I care, but for some of you out there that may be what you’re looking for) and fiber.

I urge you to give almond flour a try, even if you’re not gluten free. So what did I do with all this bread you ask? What a great weekend it turned out to be!

This entry was tagged: quick bread

#97 Plant Based Keto with Dr. Will Cole

#137 What Really Happens When You Eat Keto