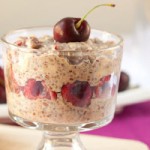 The weekend went by terribly fast, didn’t it? It hasn’t stopped raining in over 2 weeks, or at least it seems that way. Instead of relaxing outside as I’m sure most of you did, we spent most of the weekend cuddled up on the couch with the puppies, watching movies and dozing off here and there. It was definitely a lazy weekend.

Kevin picked up some great movies though! Red Riding Hood — the reviews for this movie aren’t good at all. But who listens to reviews, anyway? The cinematography was amazing. About 10 minutes in I guessed that it was directed by the same director of Twilight, and I was right! They captured the picturesque fairytale town perfectly and the soundtrack was amazing! The story line was pretty good, definitely not the strongest, but the movie had me trying to guess who the wolf was right up until the end. Kevin and I gave it 8/10. The Adjustment Bureau — it has to be said… I LOVE Matt Damon! Not in a teenage heart throb crush sort of way, more like in a “I wish all actors could be THIS good” way. This movie far surpassed my expectations. It’s such an original take on a love story! It’s a must see. Kevin and I gave it a 9/10. The Unknown — this movie definitely had me guessing for awhile, but it wasn’t my favorite. It’s jam packed full of action, so I came to look forward to the fight scenes or the explosions that were around every corner. As always, Liam Neeson played the same hard and tough character that he always does. It was meh for me, but Kevin really liked it. We settled on a 7/10.

And we had a great breakfast Sunday morning, or rather I had a grrreat breakfast, and Kevin a mediocre one of cinnamon toast.

I whipped up another batch of Blueberry Banana Cake Bars to go along with my pudding. I think next time I’ll replace the blueberries with chocolate chips and increase the banana. Mmm maybe I’ll be making these again tomorrow…

I’m happy we had the relaxing weekend that we did, as this week is going to be pretty hectic! We both have a lot of meetings this week, we have to grout the bathroom, paint, I’m going golfing with ladies from the office, and my sister’s celebrating her 22nd birthday! Here’s to a successful week!